Or… Where do I come from?

One of the reasons people take DNA tests is to figure out their genetic history. They want to prove their connection to a certain place, race, or ethnicity.

Lately, I’ve seen commercials where people were surprised they had Native American ancestry… or they thought they were from one region and their DNA says they’re from another… In my family, we’ve always been told that we had some Cherokee blood… but none is indicated in my DNA (maybe it’s too diluted by generations to be seen).

I just got an email from MyHeritage that provided me their interpretation of my ethnicity:

What’s interesting, however, is that my earlier report from Ancestry is a quite different:

So now I’m confused!  Am I European? Or English? Looking at this table, there is a huge difference in my percentages…

But, as both companies will tell you, these numbers are only estimates based on statistics.  So there is enough slop in the forumlae so that you can’t determine accurately what your genetics tell you – at least not yet.

Maybe in the future, there will be a breakthrough.  For now, these systems are more like guesstimates!  From all of this information, I’m putting down my “Iberian” connection down to the built in slop (fudge factors) in the science.

Well… Ancestry.com has really helped the masses find family and research their ancestors. And now that AncestryDNA is available, more people are jumping on the bandwagon as it were. And, since its “DNA” it has to be true. Unfortunately, many of these people are missing one major aspect: verification.

As a technical writing instructor at our local community college, I try to teach people to think logically and question everything.  Somehow, I think this same skill set needs to be taught to new genealogists as well. All data should be verified!

One example is my 4th great-grandfather Isaac Shannon (I’ve mentioned him in a previous blog concerning his slave ownership). My AncestryDNA found a 4th-6th cousin of mine with Isaac Shannon also being this person’s 4th great-grandfather.  This is a cool feature in that I can sometimes find new or missing information from other peoples’ research which saves me a LOT of time.  Unfortunately, that is the problem with many people.  They save the time; but don’t check the facts.

Here’s the basic facts of Isaac’s life as reported by many people using Ancestry: He was born about 1799 in Kentucky. He likely married Jemimah Black in about 1821 in Texas. And then he died during or after 1863 in either Texas (major consensus) or Illinois.

So how true is any of that?

Well, I believe the birth information is likely true.  He (or someone who knew him at his residence) reported to the census takers in the Federal Census of 1850 and the 1860 Federal Census that he was born in Kentucky.  Also the reported age was 51 and 61 years old respectively both of which point to his birth being in 1799.  And I do believe the census information I’ve found corresponds to the correct Isaac Shannon (there were a few that I’ve found so far).

The marriage information is less guaranteed in my opinion. The information comes from a “… unique collection of records … extracted from a variety of sources including family group sheets and electronic databases.” This means that the source is from unverifiable information. Not only that, but Isaac was born in Kentucky, and Jemimah was born in one of the Carolinas about 1804.  Everything I have found has them living in Arkansas from at least 1821 (via tax records) to 1863.  It’s possible, but I don’t see them both travelling from their birth states to Texas – find each other – get married – and then move to Arkansas in the same year.  You gotta remember – any travelling would have been in horse drawn carts or the like. So, is the date accurate? Could be; but I’ve found no real proof.  Is the location accurate? Who knows – I sure don’t.

Finally, the death of Isaac has two different locations and years.  A prevailing number of Ancestry trees has him dying in Texas in 1865. Others have him dying in Illinois in 1863.  The first is interesting in that the sources used to show that he died in 1865 in Texas are other peoples’ Ancestry trees – which is to say – there is no proof.

The second death date was actually fun to disprove.  If you search Ancestry for “Isaac Shannon” you will find all sorts of information.  And, if you go to Fold3.com (a military records resource) and do the same search you will find even more information.  I’ve found a minimum of three that were living during the Civil War era: a 60 year old man living in Arkansas, an 18 year old man in Texas, and a dead Union soldier with orphaned children in Indiana (who is clearly not my ancestor).

First off… there IS an Isaac Shannon that died of unknown causes as a prisoner of war at Camp Butler, Illinois in February 23, 1863 after being captured a month earlier.  However, if someone were to ask questions – one of them might be “Why did an Arkansan join the Confederate Army in Texas?” Another question might be “Why is a 62 year old joining the Texas Cavalry?”

So I did a little more digging at Fold3.com (which is a subscription service).  If we look at the 25th Texas Cavalry Isaac Shannon, we find out he was 18 years old when he joined (see the picture above)! He actually joined an infantry regiment that was later transformed into the cavalry regiment. This is obviously not my 60 year old Arkansan 4th great-grandfather.

A little more research shows that my Isaac Shannon signed a Bond of Obedience in Washington County, Arkansas on 5 February 1863 which states that he is, has been, and will be obedient to the United States government.

So… did MY Isaac Shannon die in a prisoner of war camp in Illinois? I’m pretty sure the answer is “No.”  However, one word of mouth story has reached me that he and his family did move to Texas for the duration of the war.  If that is the case, then it must have happened after he signed the Bond of Obedience in Arkansas.

So when and where did he die?  Well, the 1870 Federal Census has a J. Shannon (Jemimah?) living with a W. H. and Sarah Shannon (which just so happens to match William Henry – Isaac’s and Jemimah’s son’s initials) back living in Arkansas. There is no sign of Isaac Shannon in this census.  So maybe the word of mouth fact of them moving to Texas to wait out the rest of the Civil War and the unproven statements that he died in Texas about 1865 are true?  I honestly don’t know – but it’s a place to start searching for old newspapers, tombstones, and the like.

And that is what genealogical research is about…

It’s been a long time coming (I’ve been planning on submitting my DNA to Ancestry for quite a while now but kept spending my money on other useless stuff); but I’ve finally ordered and received my DNA kit from Ancestry.com. Why? Because I’m a genealogy and technogeek.

One real reason is that I wanted to see where the family comes from (as far as the DNA reports). My research, so far, goes back to the mid-1700s and the only countries outside of the United States that I’ve found direct ancestors to have come from is Ireland, Scotland, Germany, and France (specifically the Alsace-Lorraine region).  Check out a previous post in my blog to learn more about this Alsace-Lorraine discussion.

Another reason is that Ancestry.com is able to match up my DNA with other peoples’ DNA that indicate we are related somehow.  This can help us find new information concerning our family tree.

There are concerns that people have and/or are warned about.  Ancestry, and the other private companies, have been approached by law enforcement to get DNA results for specific individuals. So, if you plan on committing a crime AND leaving DNA behind – you best not give away your DNA samples.  For me, however, the government already has my DNA from my time in the military (easier for them to identify my remains even if I left no fingerprints or dental behind). So… I’m busted anyway if I leave a random hair behind at a crime scene.  Guess I’ll have to go out of my way to not commit any crimes.

Another concern is that the private DNA companies might sell or give away our DNA data to other companie (like the insurance folks). The concern is that if the insurance company finds out your genetically susceptible to some disease, they won’t insure you or they’ll charge you a higher premium.Currently, Ancestry’s privacy policy says that they won’t. And, if you do allow them to, when they provide your DNA results to 3rd parties they will de-identify you. The 3rd party will get your results but won’t be able to know where they came from. Even if all this changes, it still won’t bother me. My insurance is already paid for for my life.  Unless the government fails, I’m covered.

So, I opened it up and found all the pieces… 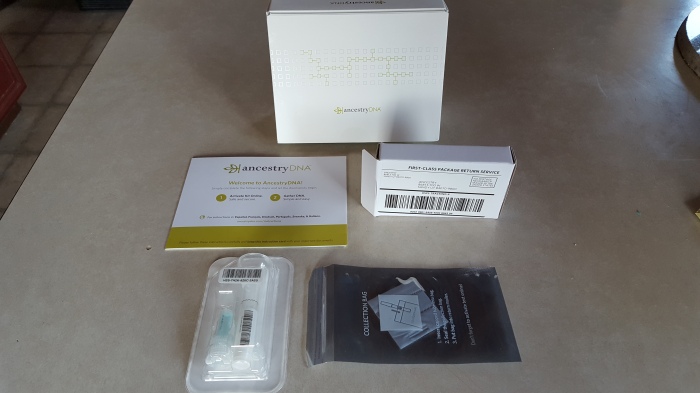 And, I was a little shocked to see how much saliva I was going to have to supply.  It looked like a LOT.  But then I noticed that the tube was already mostly filled.  Turns out I needed to provide about 1/4 teaspoon worth. Everything underneath the activation code label is filled; so it wasn’t too hard to fill it up. 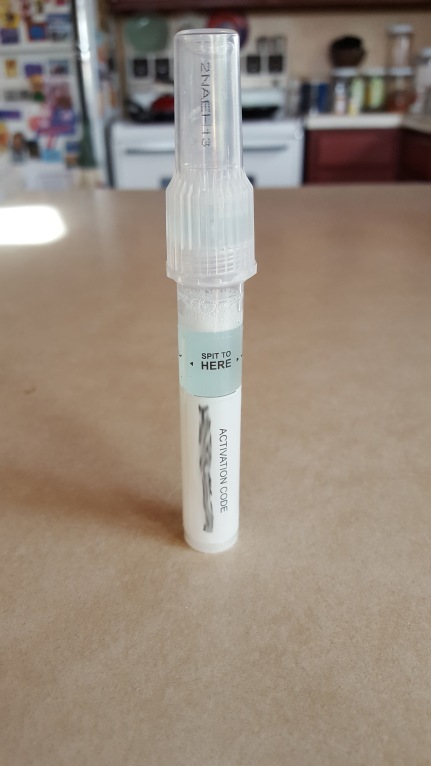 Now all I have to do is wait 6-8 weeks for them to analyze the sample!  Once they do that, I’ll write another blog to let you know how it went.

If you would like to order a kit to check out what your DNA says about your genealogy or ethnic background… use this link (you’ll get the kit cheaper at $89 and I get a $10 gift card). Typically, the non-sale price of the kit is $99, I got it on sale (which ends today) for $79.  And there is a $10 shipping fee; but I found a free shipping coupon code on Groupon.com.